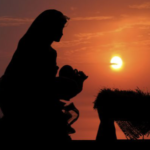 December 25th, 2022 – The birth of the world’s savior, foretold hundreds of years prior to prophets and kings, was first announced to shepherds.  Lowly shepherds, the scripture tells us.   Lowly in that shepherds of Jesus’ day were not considered of higher standards than that of other occupations.   Shepherds could not even testify in a court of law, their word being less than reputable.   Compare this to the infant Jesus.  Not born in a castle or marvelous temple, adorned with purple robes and jewels.  Instead, He was born in a manager, placed in a feeding trough for animals, and wrapped in swaddling clothes.   It seems that the theme of His ministry was set in motion from the very beginning.